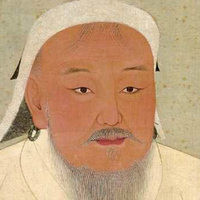 Chinggis Khan was the young king who united the warring clans, stamped out feuds, and gave Mongolians a sense of direction. To the Mongolians, he represents strength, unity, law, and order. To this day, Mongolians look for kings like him. They want a king that has the same morals and ethics as him because they thought he was such a great leader.

Kublai Khan, also known as Qubilai Khan, became the emperor of China's Yuan dynasty in 1271. Qubilai established his winter capital in Dadu, which is now present day Beijing. Kublai is known for realizing that at the time he was the ruler, that the Mongol empire was falling and had reaches its limits of expansion. Mongols were also loosing battles against the Egyptian Mamluks and against Java. Instead of looking for more fights, Qubilai soon realized that he needed to keep the empire together. This was the height of the Mongols' glory: the empire stretched from Korea to Hungary, and as far south as Vietnam, making it the largest empire the world has ever known. This allowed them to be able to build roads and canals, allowing them to deliver food from the countryside to the cities. 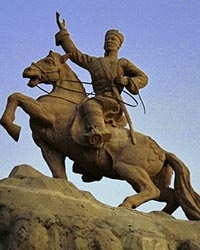 In 1921, Sukhbaatar was made commander-in-chief of the Mongolian People's Revolutionary Army. The army was in actual fact a Soviet division with some Mongolian elements, and Sukhbaatar was little more than a Soviet puppet. This Soviet/Mongolian army then defeated the meagre Chinese forces, and, later, the White Russians led by Baron Ungern Von Stennberg (also know as the 'Mad Baron'). In July of that year, he declared Mongolia's independence from China and Mongolia's servitude to Russia at what is now known as Sukhbaatar Square. He did not live a long life and died at the age of thirty, but he did do a lot for Mongolia. He is a well known figure throughout the whole country, especially in Ulaanbataar. His face is on quite a bit of currency and there is also a statue in Ulaanbataar in commemoration of all the things he did.

Born in 1635, Zanabazar is Mongolia's earliest Buddhist leader and first high reincarnated lama, as well as a politician, diplomat and renowned sculptor. Said to be descended from Chinggis Khan and from a Bodhisattva, he was deemed a possible gegeen, or saint, at the age of three, enthroned at the age of five, and studied Buddhism with the Dalai Lama in Tibet. Zanabazar returned to Mongolia to spread Tibetan Buddhism and created many famous bronze statues of Buddha. After a long confrontation with the Oirad Mongols, the Khalkha Mongols, under his religious and political leadership, opted for an alliance with the Manchu rulers of China in 1691. Zanabazar was murdered in 1723 during a visit to Beijing soon after the Manchu emperor died, according to a biography published in 1995. Many Mongolians refer to the time of Zanabazar's life as Mongolia's Renaissance period. His most enduring legacy is the sensuous statues of the incarnation of compassion, the deity Tara. His creations can be seen in many monasteries and museums in Mongolia, such as at the Gandan Khiid, the Erdene Zuu Khiid and the Winter Palace of Bogd Khaan. A museum of fine arts in Ulaanbaatar is also named after him. 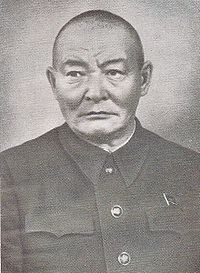 Khorloogiyn Choibalsan became a great hero to Mongolia during the 1921 revolution. He became leader of Mongolia in 1928 and was a ruthless leader. He did favors for the peasants such as distributing land to them and animals were just given to them. But Choibalsan was very much against religion.  In 1932, more than 700 people, mostly monks, were imprisoned or murdered, their property seized and collectivized. Farmers were forced to join cooperatives and private business was banned, Chinese and other foreign traders were expelled, and all transport was nationalized. The destruction of private enterprise without sufficient time to build up a working state sector had the same result in Mongolia as it did in the Soviet Union: famine. Although Choibalsan's regime has been heavily criticized by modern Mongolians, statues of him remain, and his name is still used for streets, cities and sums. Some Mongolians admire him for defending Mongolias independence.