Mongolia has a wide range of different tastes and textures that would probably be a shock to most Americans compared to what they are accustom to. Mongolians diet is very dependent on a variety of meat that includes; mutton, beef, camel, horse, sheep, and even gazelle. The cause for this meat-dependent diet is the need for hearty food during the long, freezing winters. Although meat is a significant part of their diet they also eat a variety of cereal, barley, and fruit that is native to their country. Mongolians also drink a lot of tea. The traditional tea is called Suutei Tsai, which is a milk tea and can sometimes be mixed with millet (a cereal plant). The two most important meals of the day for Mongolians are breakfast and lunch. They normally consist of boiled mutton, that have lots of fat and flour, and some type of dairy product or rice. 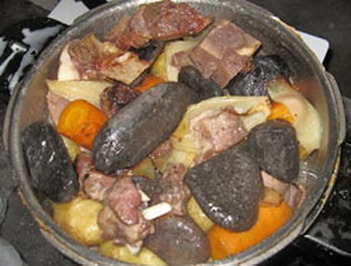 Horhog
Horhog is a traditional Mongolian dish made with sheep. It is cooked in a very differently than most Americans would cook their food. Most popularly cooked outside or during camping trips, horhog is cooked in an aluminum can with hot stones. When the sheep turns to stew the horhog is done. The hot stones are removed then given to all of the people who are going to eat the horhog and they roll the hot greasy stones in their palms and fingers. Mongolians believe that if you roll or hold the stone that it is good for your health. They believe that the the heat and the grease from the just cooked meat eliminates fatigue and helps with their stamina. Horhog is traditionally made for five or more people and is said to bring people together with the beginning of a friendship, it is also said to create a sense of togetherness.

First heat stones on firewood on open fire. It is important to select the right stones, as not all stones are good for cooking horhog. Stones must be river stones that are smoothly shaped and medium sized. Stones must be thoroughly heated until almost red. If heated correctly, stones usually do not retain any smoke and have a clean surface.

While stones are heated, prepare meat for cooking. Cut meat in large pieces with bones. If you are cooking a more western-oriented horhog, prepare also vegetables. Wash and peel potatoes, carrots, turnips and onions. Some people add also garlic sprouts.

Pour 4 liters of water (cold or warm) in a 20-liter aluminum can. The amount of water depends on how much bouillon you would like to have in your horhog.

Put seasonings in water. Then start putting meat layering it with hot stones. If you are cooking together vegetables, put them always on top.

Close can tightly and leave the meat to cook for an hour and a half. The meat is supposed to cook on its own purely by the heat of hot stones. However, it sometimes needs additional heating, which you can provide by putting the can on slow open fire. Extra heating may be required due to several reasons. The meat may not be properly layered with hot stones or the number of stones may not be enough for the amount of meat being cooked.

When the cooking is done, carefully open the can and let the vapors out. First, pull out the stones and pile them aside. Meat and bouillon are usually served separately.

Similar to horhog, boodog is a traditional Mongolian dish that is normally cooked outdoors and is usually cooked for five or more people. Boodog is made from borlon, a two year old goat, cooked with hot stones put inside of it. Much like Horhog, the cooking of the boodog creates a sense of friendship and togetherness. Even though cooking this meal is very much like cooking horhog, it requires a lot more practice. A goat is filled with preheated hot stones and is tightly sealed. The skin is usually left on. The meat is cooked from inside by hot stones. Simultaneously, the meat is heated from outside with a gas burner to remove hair and roast the meat. This process must be handled with care and expertise. The temperature of stones and the amount of heat from outside must be well balanced and regulated. Otherwise, a lot of pressurized vapor will accumulate inside the meat and the whole package may blow up. Just like in horhog, when the cooking is done, the stones are taken out first and given to all boodog eaters. While still hot and greasy, stones should be rolled between palms or held with fingers to eliminate fatigue and boost stamina. A hearty stew is usually formed inside the goat. It is separated from the meat and put in a pot. 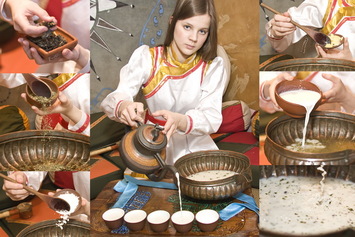 Suutei Tsai is a Mongolian milk tea. It is made form pouring cold water over crushed green tea leaves and milk, then bringing it to a boil. Some families even add salt to the milk tea. Once the tea is brought to a boil, then it is strained and served or just served as is.

Another popular version of this milk tea is one which is made out of millet. Millet is a cereal plant that is fast growing and usually grown in warm countries. To make this milk tea, you take the millet, rinse it, coat it with flour, and then fry it in melted butter until it is golden brown. All you have to do is add the millet to the boiling tea then serve it.
("Best of Mongolia")